Office spaces are very interesting to me. I’ve been a heavy computer user since 1995 at the green age of fourteen. I have worked in some of the most ergonomically perplexing setups and I have seen many different office arrangements. Now that I’m a little older (and nerdier) I wish I had taken pictures of the various computer stations I’ve worked at – namely my design station from Mail Boxes Etc. and Multimedia setup from the first Benjamin James office. Oh well, we live and learn. Here are some of my setups from over the years.

You can click to enlarge any of these images. 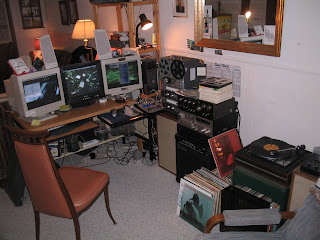 2005 – Home setup
I have been using dual monitors since 2001 and I can never go back. In ’05 I started using triple monitors by purchasing a decent PCI video card. I have had the ability since then to go quad, but desk space becomes an issue. That was also the year I stared collecting vinyl.

2006 – Benjamin James Marketing Communications (panorama)
I wish I had a more conventional photo of this setup. This is a 360 degree panorama I made of the bullpen right after we moved into the McIntyre studio. I used two computers here (one was an internal server I used for testing). That monitor was huge. 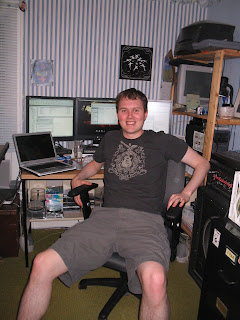 2007 – First Debut Creative office
Amazingly I don’t have any pictures of this setup where I’m not the dominant element. This office was really small, and on humid days would reach nearly 45 degrees. At a point a couple months after this photo I would have four computer systems setup as I was transitioning. 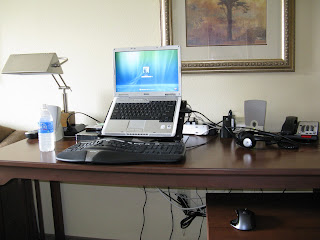 In March 2008 I went to Tennessee with my wife who had a staggering five weeks of training. This was my “temporary” office. Five weeks is a super long time; especially when one is in an unergonomic chair that is about 8″ too short (heck, Kristi’s feet could touch the ground!). Adjusting to one monitor again was also more than I cared for, but it was all better than no wife for over a month. 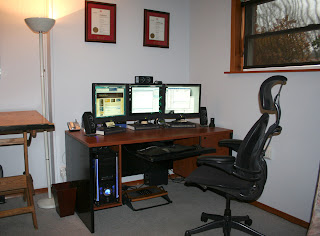 2008 – Debut Creative
This is by far the most comfortable and radical setup I have ever had. Still, I do have some ideas for improvements. Two things set this apart from all other systems I’ve ever worked on. One; this is by far the fastest computer I have ever worked on, even after a year and a half (buydirectpc.com) and Two; ergonomics. Any computer user basically interface the chair, footrest and keyboard tray constantly, I did a fair bit of research before settling on these (humanscale.com and Lover’s at Work)

I love looking at office spaces. Want to talk about yours?