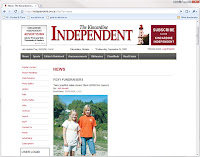 About a year and a half ago I started doing weekly updates for a local Kincardine newspaper. Their site was a static HTML site with the purpose of delivering the news to a couple thousand viewers a week. The Kincardine Independent is the only locally owned and independent news organization in the area, so they are regarded as straight shooting, and not under the thumb of nationally owned syndicates.

With the launch of their redesigned paper we wanted to give the site a bit of an update too. This version of Independent is made with the Drupal CMS and is a lot more interactive for readers. I didn’t want to alienate the current reader base so I kept the redesign simple and familiar.

This is the first Drupal site I have made to this scale, check it out
The Kincardine Independent.