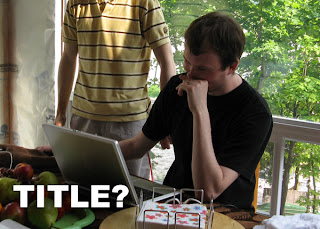 Job titles are a subject that have always made me a bit edgy. They can be either so detrimental as to be insulting or so big as to be disastrously misleading. Now as a freelancer with my own company I have the duty of assigning myself a title.

It was an easy decision for me to skip the silly self-indulgent titles like “president” or “CEO”. I mean c’mon, it’s a one man operation (and I don’t intend on making it look like something it’s not). For me, even credible titles like “Creative Director” are also out the window since there is no one but myself to direct.

Graphic Designer (2002 – 2005)
Ah, my green days. “Graphic Designer” was so prestigious sounding! To me this is as massive a title in scope as “civil servant”. With so many outlets from print to media to web; these boots are too big – without focusing enough on the web aspect of my job.

I can remember my first time seeing my name with this title on a business card. Pretty cool. It was Mail Boxes Etc (and I had passed on the title “Manager” to have that title alone)

IT / Junior Designer (2005 – 2006)
By far the worst job title I had. I didn’t mind the Junior designer bit; I was a fresh face in Benjamin James Marketing Communications working with much more experienced designers. I hated the slash and the IT before it. IT is a huge misnomer, but I guess my higher ups wanted me to bear it for client reassurance or something. Aside from being the most computer literate in the office of 12, I have no qualifications for this title. Being “IT” has lead to many terrible (yet now somehow funny) stories of lost files, emails and time.

Even though I’m on contract with this agency still, AND the fact that hasn’t been my title since 2006, I was still called that today. Old habits die hard.

Multimedia Developer OR New Media Developer (2006 – 2007)
“Jack of all trades, master of none” is more like it. To me this title is also a sweeping stroke of a large brush. Being a graduate of Interactive Multimedia means that I am well versed in Audio, Video, Flash, dynamic web development and database design. Now with the emergence of Web 2.0 I feel that these facets almost go without saying. That said, I don’t think a Multimedia Developer should be expected to be a one-stop shop either. Each one of these disciplines is vast enough to easily fill a lifetime career.

To me this job title is begging clients for scope creep!

Web Designer (2008)
I have been keeping an eye on peers to see what labels we give ourselves. “Web Designer / Developer” is the one I see the most, but I find the slash to needlessly complicate the title. I don’t know any web designers who aren’t competent at reading and creating code on some level. Web Designer sounds so nice and simplistic. Yes, it involves multimedia, databases, CMS, RSS and a handful of languages; but the title doesn’t need to say all of that.

One of the most important jobs of the web designer then becomes educating his clients as to what it is he or she does. The job title shouldn’t have to do that in this industry – many clients are already intimidated by the internet. I think “Web Designer” is soft and approachable, while being universally understood and more practical than fun (but pretentious) made-up titles like “internet architect” etc.

It’s not the perfect solution, but I really like this title for now. The internet is always changing and evolving – as are peoples perceptions of it.