Using common corporate phrases, jargon, and lingo is a really important part of my industry, and perhaps all production related industries that have vendor/client relationships. It’s arguably a very important skill that a client-facing person needs to have. Probably. Using them can not only give the client confidence that you know what you’re talking about, but the phrases themselves may succinctly capture the essence of what you’re saying quickly, while using verbose originally crafted sentences might take a bit longer, and more processing.

The only downside to them is they can be a bit distracting to dorks like me.

I’m a web designer. I have an amazing and very close relationship with my Imagination. Whether I like to admit it or not, my Imagination comes with me everywhere, including meetings and conversations with business people! Sometimes completely innocuous words or phrases will remind my Imagination of something that he has to immediately tell – or worse; show me. Sometimes I’ll come to realize that I’ve been hanging-out with my Imagination; swimming in the ocean looking at turtles etc., when really I should be engaged in the conversation that I’m physically standing in proximity of, while nodding and looking thoughtful.

It can be a problem.

Here are some of the phrases that can set me merrily down the path to a mental check-out.

Meaning “a key point” eg. “The Net-Net of the meeting is that we need more animated gifs”

This used to make me just think about the relationship of Net / Gross in the few accounting lessons I had. I would invariably try to imagine the speaker saying “the gross-gross”, “gross-net” or “the not-gross not-gross”, and all the other silly abstract combinations.

Recently, a friend told me it makes him think of a giant fishing net designed only to catch other fishing nets. I hadn’t thought about synonyms of the word Net, and now I also think about Internet-Internet. This can make me think of Russian nesting dolls or the movie Inception. From there the journey my Imagination takes me on can get tangential.

Get our ducks in a row

Meaning: To get organized

I don’t know that I can really blame Imagination on this one, it’s just too obvious. I instantly picture the speaker trying to line up cute fuzzy little ducklings. This person is usually dressed very well, and the juxtaposition of herding wandering ducklings is incredibly amusing. The cutest duck is always straying from the line and walking in my direction, and I have bread!  From there I might imagine the parent ducks swooping in and attacking us all. This might lead to me remembering the Monty Python radio sketch “Allistaire Cook Being Attacked by a duck“ – Thankfully, I don’t always recall this, since once Monty Python enters my imagination the meeting might as well end. 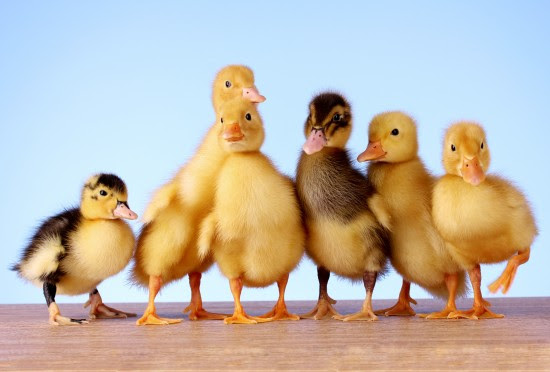 A lot on my plate

The scenario writes itself: I get paid to eat. Sometimes I’m paid to eat sliders, widgets and galleries. I try to mentally apply the same level of efficiencies to this as I do with my desk job. Would I get an ergonomic dinner chair? Would I have to track my time per food group? Would dual-plates be as awesome as dual-monitors? etc.

Meaning: From now on, or a reference to the next thing to do. A common sentence prefix.

I imagine that this meeting has become a tiny reprimand for my (fictitious) nasty habit of moving backwards. I sometimes think about the project, and how funny it would be if we started with a completed website, and I’ve been working backwards removing code to bring it to the inevitable conclusion of wireframes and scribbles in a notebook.

At the end of the day

Meaning: The final desired result, eg. “At the end of the day, the cats should be talking with broken English.”

Admittedly this is the least distracting cliché I hear often.  I mentally transpose the exact meeting into a situation where all of us are in pyjamas and meeting in the moonlight. I have tea. It’s strange to imagine business people in baggy flannel bottoms and oversized sports t-shirts. Also, you have a hole in your sock that the tip of your toe is poking through.

A lot of irons in the fire

For some reason I always default to thinking about Jeremy Irons, but the classic thought here is related to golf clubs and the irons you use to press a shirt. I’m not sure what the intended irons actually are. They likely are a reference back to black-smithing, which seems like a weird metaphor to draw on when we’re talking about website scope and deadlines.

For a while a former colleague and I tried to invent our own new business jargon for our lingo-addict boss. It was actually a series of slogans that would be so easy to adopt. Please join me in adding these gems to your vocabulary for your next project.

It starts with some familiar old friends:

From there we create some new ones:

I personally don’t have a beef with the convention of using these phrases, and it’s not literally inevitable that I’ll let the intriguing etymology of them suck me out of the room into a hazy and thrilling cut-scene. In fact, as I get older and more mature I’m constantly bettering myself and my level of focus, with the ultimate goal of being a shining example of a productive and attentive member of society.

I should be totally cured of getting distracted by such idioms by the end of the day.