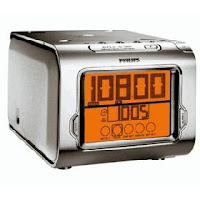 Despite my crazy fatigue I had a lot of trouble getting to sleep last night. Needless to say I wasn’t happy to hear our alarm clock go off this morning. Nor was I glad to hear it the following three times. My wife hit the wrong button and went off to the shower. When it went off again (and ear-bleedingly loud), I was faced with the challenge of turning it off. The little image with this blog might not do justice for just how many buttons are on this contraption. There are buttons on the top, the face, and the display screen. I mashed a collection of them and popped the CD thing open and somehow the music stopped. Ten minutes later it was round two. In the scuffle the CD came out and the machine was on its side. It looked done. My wife entered the room for round three and found me crouched on the end of the bed having trashed the room to unplug every electrical outlet that could have something to do with the non-stop beeping.

This annoys me more as an awake designer than a sleeping bear. In the clocks defense, I never have to turn it off, and I likely haven’t touched the thing in over three months; but as an end user I shouldn’t have to refer to the schematics every time I need to turn one of the alarms off. Dashboards, power tools and alarm clocks should all be designed so intuitively that even the grouchiest sleep deprived lunatic can turn them off first try. Less is more.